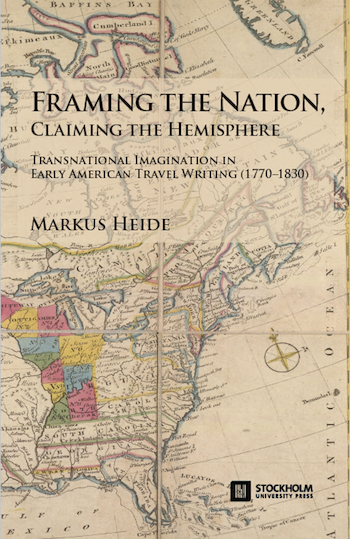 Framing the Nation, Claiming the Hemisphere

Travel reports have shaped the emergence of early U.S. culture and its “geographical imagination” (David Harvey). Framing the Nation, Claiming the Hemisphere examines the trans-national imagination in travel reports by American authors written between 1770 and 1830. Its range is from John and William Bartram’s pre-revolutionary travelogues and Jonathan Carver’s exploratory report on his journey in the Great Lakes region (1778), to Olaudah Equiano’s The Interesting Narrative (1789), to early nineteenth-century reports, such as Anne Newport Royall’s Sketches of History, Life, and Manners, in the United States (1826) and William Duane’s A Visit to Colombia (1826). The chapters of the monograph concentrate on writing about journeys to the North American ‘interior‘, the Caribbean, Latin America, and Africa. The primary sources were written between the beginning of the struggle against British rule, following the end of the French and Indian War, and the beginning of Andrew Jackson’s presidency. The decades between 1770 and 1830 were times of shifting colonial boundaries, nation-building, and emergent discourses of collective identification in North America. The study reads travel writing in the context of the identity-generating discourses of nation-building, imperialism, anti-colonialism, and cosmopolitanism.

In contrast to scholarship that engages a notion of Americanness based primarily on ‘domestic’ outlooks and experiences such as westward expansion (the frontier), the study highlights the function of categories such as the outside world, neighboring nations, and colonial empires in the emergence of U.S. national literary imagination. How does a shift in focus from a discursive ‘domestication’ of North American space to an interest in the Othering of what lies beyond national borders affect the understanding of the emergent national self? These are the kind of questions that begin by seeing the transnational as a fundamental element of national emergence.

The monograph ultimately works to demonstrate how travel writing – with very few exceptions – supports and affirms processes of nation-building. Thus, the national narrative evolves from representations of contact scenarios in North America, in the transatlantic world, and around the globe. Without ignoring the roles of national mythology, the analysis concentrates on the continual co-existence of fluid notions of both ‘home’ and ‘abroad’ in times of shifting geographical borders. From such a perspective, travel writing not only contributes to shaping the national imagination and its conceptions of superiority but is also complicit in territorial expansionism and its subjugation of conquered peoples and their respective cultural histories.

The present study emphasizes the significance of accounts of non-voluntary movement that embrace captivity narratives, slave narratives, sailor narratives, and reports by individuals who had access to neither publishing nor public culture. Accounts by such authors have often been published posthumously, promoted by printers, professional authors, or scholars. The central focus of analysis, however, examines how American self-fashioning and self-positioning in the world appear in the travel writing of the period. The trans-national imagination engages in a symbolic construction both of the collective national ‘Self’ and of the outside world as the nation’s ‘Other.’

Travel writing functions as a tool in the nation-building process of the United States: a tool that reflects the mindset of the time, a tool that imagines a national community, and a tool that shapes the mindset of a people. The study maintains that travel writing, as a literary format, negotiates the triangular relationship between American post-revolutionary nation-building, continued European colonial expansion in the Americas, and the ongoing existence of indigenous nations. Underlying each of the readings is a common thesis that travel writing defines and negotiates borders, limits, and territorial expansion, and that it does so within the parameters of nation-building.

These are words or phrases in the text that have been automatically identified by the Named Entity Recognition and Disambiguation service, which provides Wikipedia (

) links for these entities.

How to cite this book

This is an Open Access book distributed under the terms of the Creative Commons Attribution 4.0 license (unless stated otherwise), which permits unrestricted use, distribution and reproduction in any medium, provided the original work is properly cited. Copyright is retained by the author(s).